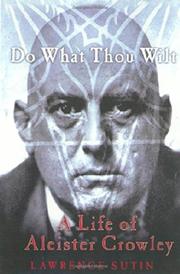 DO WHAT THOU WILT

A Life of Aleister Crowley

Sutin (Divine Invasions, 1989) paints a rich narrative of the eccentric visionary Aleister Crowley’s life, which now seems somewhat ho-hum as for his sexual escapades—the source of much of his bad press—but all the more vile for his egomania and fascist tendencies.

He was called the wickedest man on earth; he also adorned the cover of the Beatles’ Sergeant Pepper’s Lonely Hearts Club Band album: Aleister Crowley was an expert on the art of high magic, the white variety (which has nothing to do with purity and everything to do with “the most sublime privilege of man”): “By development of will-power, by rigorous self-control, by solitude, meditation and prayer, a man may be granted the Knowledge and Conversation of his Holy Guardian Angel.” The author’s intent is to get beyond the exotic image. This he does mostly by putting Crowley’s human face on display: the mountaineer, the family man, the serious investigator of the astral plane. Yet ever-present are Crowley’s ugly maneuverings in the magic community, his pleasure at Hitler’s supposed use of his work, and his abuse of friends. Crowley’s sexual acrobatics no longer shock, and they are unconvincing as a sacramental ritual. Sutin is a very clean writer, which makes a difference considering the level of detail on parade (“From March 23 to April 7, Crowley endured a fallow period”), but he fails to convey any sense of Crowley’s mystical notions or experiences. When he relates that “In the Tenth Aethyr, Crowley would confront the Dispersion of the Abyss,” it might as well be liner notes for a PlayStation game, and when a character whispers “Chaos is my name, and thick darkness,” the reader gets no chill.

Still, this is certainly the biography against which to measure the lurid claims and devout counterclaims prompted by the Crowley legend. (photos, not seen)