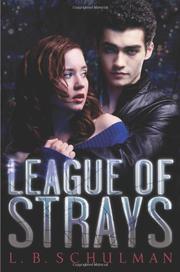 A group of misfits is drawn together by a charismatic, sinister boy for friendship and revenge.

When narrator Charlotte Brody moves across the state in her senior year, she is virtually alone in her new school. She's wary when she receives a mysterious invitation to join the "League of Strays," but she figures she's got little to lose. The League is a truly motley crew: a gay boy and suspected drug dealer, a perpetually angry girl who always wears camouflage, the likely school valedictorian and Charlotte, a violist on the fast track to a conservatory. They are pulled together by dark and dangerous Kade, a boy with Robert Pattinson hair and absent parents. Forbidden to interact at school, they meet in secret to plan revenge against the people who have made their lives miserable—"pranks" that are not innocent even from the first, but cruel, criminal and life-threatening. Law-abiding Charlotte, though horrified, stays with the League because of both the friendship it offers and her (irritatingly mindless) attraction to Kade. Readers will spot Kade's sociopathy from the get-go, making it difficult to remain sympathetic to her. By starting the League's activities out with an act of out-and-out vandalism that turns into arson rather than lulling Charlotte and readers with relatively innocent pranks, Schulman sacrifices building tension, turning this thriller into Charlotte's drawn-out journey of self-discovery.

Peer pressure is an evergreen theme, but it is imperfectly explored here.