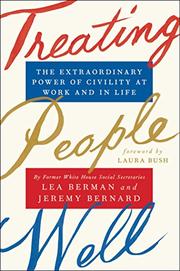 The Extraordinary Power of Civility at Work and in Life

Have an urge to tweet, angrily, in the middle of the night? You might wish to curb it after reading this guide to modern manners by two former White House staffers.

George W. Bush administration veteran Berman and Barack Obama administration social secretary Bernard understand, as their employers did, that “each president sets a tone for the nation” and, as such, cultivates habits of “steadiness, restraint, and decency,” which in turn confer moral authority on the person who practices them. By extension, these lessons from the Oval Office apply to the daily lives of each of us. Borrowing a page from Letitia Baldrige, Berman and Bernard serve up a much-needed handbook on how to navigate the mine-strewn worlds of society, commerce, and other adult realms, advising a sort of self-aware good humor (“one of the easiest ways to disarm a skeptic or potential competitor is to be self-deprecating”) and a consistent application of attention, respect, thoughtful comportment, and active listening. They deliver examples taken mostly from within the diamond of the District of Columbia, writing, for instance, that Ray LaHood, a Republican who served as Obama’s secretary of transportation, took an agency that was renowned for being a miserable place to work and utterly remade morale simply by listening: “his first step was to gather information and get a grasp of the most pressing issues.” That’s a good model to follow. The elephant in the room, of course, is the current occupant of the White House, who serves as an example of how not to behave—though the authors, of course, are much too polite to say so.

There’s a shortage of books of advice to courtiers in the world. This one may not be quite in the league of Judith Martin, to say nothing of Machiavelli, but it’s still highly entertaining and highly useful.