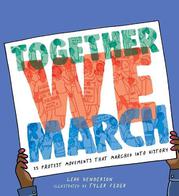 25 Protest Movements That Marched Into History

Marching for the rights of all—children, Black people, women, Indigenous people, DREAMers, the LGBTQ+ community, disabled individuals, and many others—is explored in this history.

From the children who walked with Mother Jones from Pennsylvania to New York in 1903 to speak for better youth labor laws to the worldwide Youth Climate Strike in March 2019, all kinds of marches—many linked to children and youth—are described in lively language and illustrated with bright cartoons that emphasize diversity among participants and illustrate the banners and posters carried. Each two-page spread contains a short history of each march and the actions taken, set in dense type, along with one or two quotes from organizers. Some, like the Longest Walk, a 1978 march from San Francisco to Washington, D.C., undertaken by Indigenous people to bring attention to 11 Congressional bills that threatened sovereignty, were weeks or months long. Widely known events like the recent Women’s March in January 2017 and actions known only to a few historians, like the 1943 march of Bulgarian Jews against the Holocaust, receive equal treatment. Connections among marches and themes repeated due to unchanging social and political conditions are pointed out and are one of the book’s strengths. The visually appealing last spread shows a timeline of each event placed on a long winding road. There is neither a table of contents nor an index, but the information presented is accessible and should really be read straight through for greatest impact. (This book was reviewed digitally with 11-by-20-inch double-page spreads viewed at 27.3% of actual size.)

This inspiring book will encourage activism.