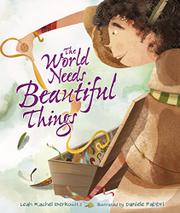 A young boy’s love for nature reminds the adults around him to appreciate the simpler things.

Bezalel is a collector. He is also one of Pharaoh’s slaves in ancient Egypt. He often stops his work to pick up stones, bugs’ fallen wings, and other things from nature that others see as trash. When the slaves are freed, Bezalel brings his Beautiful Things Box with him and continues to fill it as they journey away from Egypt. When the Israelites stop in the desert and God asks Moses to build a mishkan, it is Bezalel who has the objects and the eye for finding more that allow them to make God’s sanctuary on Earth beautiful. With the exception of spreads depicting the Israelites’ nighttime travel through the desert, illustrations are earth-toned, with immersive full-bleeds and occasional vignettes. Bezalel is almost always set off, as if to depict how different he is from others. Indeed, he could be interpreted as being on the autism spectrum, an interpretation also implied by the author’s note that children like Bezalel “look different or act differently from others.” Readers unfamiliar with the story of the Jews’ exodus from Egypt may find it difficult to understand the beginning of the story, as Bezalel and the other Jews toil, and those who are familiar with it may find the one-sentence announcement of freedom insufficiently attentive of the moment.

An interesting take on biblical stories and autism stories that may struggle to find an audience.