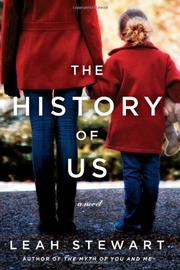 THE HISTORY OF US

A professor who raised her late sister’s three children grapples with the long-term consequences.

At 28, Eloise is a rising star in Harvard’s history department, having just published a much acclaimed book. She’s prepared for a fulfilling academic career but not for the phone call she receives from her 11-year-old niece, Theo, telling her that she and siblings Josh, 9, and Claire, 2, need her to return home to Cincinnati immediately. The children’s vacationing parents have perished in a helicopter crash, and their grandmother, Francine, is lying in bed, unable to cope or even phone Eloise about the tragedy. Seventeen years later, the makeshift family is at a turning point. In less-than-free-wheeling Cincinnati, Eloise is loath to come out as a lesbian, although her lover is pressuring her for a commitment. She’s had to settle for a less prestigious position at a local college in order to raise her nephew and nieces in their preferred domicile, Francine’s large, crumbling Cincinnati home. (The narcissistic oldster has long since departed for Sewanee, where she makes trouble from a distance.) Josh was once a near-famous rock star before giving up music to please a manipulative girlfriend, who has since dumped him. Theo, now 28, has followed her aunt into academe but is stalled in her dissertation and her love life. Ballet prodigy Claire, 19, the only one to achieve escape velocity from Cincinnati, has left for NYC…until by chance, Theo spots her on the street, Cincinnati being not all that big a town. Francine has complicated matters by reneging on her promise to sign the house over to Eloise. Now, the Machiavellian matriarch insists that she’ll give it to whoever marries first. This hook is not as gimmicky as it seems. Rather, it forces Eloise and her charges to fully examine their connection to each other and to the world.

With a playwright’s precise, sometimes excoriating dialogue and an insightful novelist’s judicious use of interior monologue, Stewart crafts a tearful yet unsentimental family coming-of-age story.