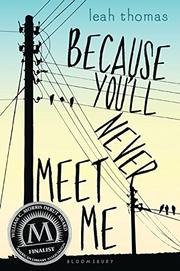 BECAUSE YOU'LL NEVER MEET ME

Ollie sees his new German pen pal, Moritz, as a potential lifeline. Ollie’s allergy to electricity has exiled him and his mother to a cabin in the Michigan woods with little company besides Auburn-Stache, his unconventional doctor, and Liz, a girl who brings him news from the world of TVs and humidifiers. Buzzing with awkward wisecracks and restless energy, he draws the aloof, sardonic Moritz into conversation. Rescued from a lab, Moritz requires a pacemaker and lacks eyes, but he insists he isn't blind; he can acutely sense his surroundings by clicking his tongue. Unfortunately, superecholocation and sarcasm don't help him fight a bully or approach Owen, the boy who treats him like a human. Ollie and Moritz need each other, even if they won't admit it. Isolation and the intimacy afforded by distance sharply focus the characters' developments; their personalities take shape quickly, and their relationship deepens as they play off each other’s anecdotes and insults. The humorous and increasingly emotional exchanges create cliffhangers, culminating in occasionally disturbing revelations about the boys' origins. Their link is heavily foreshadowed, while other plotlines remain open enough to give the ending a sense of anticipation as well as satisfaction.

A witty, unusual take on friendship and parlaying weakness into power.