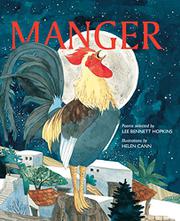 The eminent anthologist of children’s poetry has gathered together 15 poems from many sources, all centered around the theme of animals that might have been present on the night of the birth of Jesus.

An introductory poem by Hopkins sets the scene, with a striking illustration on the facing page depicting the animals looking up at a comet streaking through the night sky. Next is the rooster (also shown on the eye-catching cover illustration) who announces the birth to the world. Other animals include typical barnyard residents such as the sheep, horse, cow and goat, as well as less-expected creatures, like fish and a llama. Poets represented include X.J. Kennedy, Jane Yolen, Prince Redcloud and Alma Flor Ada. The final poem is a verse from the traditional carol “The Friendly Beasts,” describing “the donkey, / shaggy and brown” that carried Mary “safely / to Bethlehem town.” Intriguing collage illustrations using watercolor and mixed-media elements provide an elegant accompaniment to the short, quiet poems. Unusual perspectives show a cat from behind, a cow arching her neck and an owl in midflight seemingly ready to swoop off the page. All the animals gather around the manger in the final illustration, with the comet again shooting across the sky. The baby is in the manger but just barely showing, and Mary reaches out to pet the head of the shaggy, brown donkey to reward him for his faithful service.

A lovely collection for those who wish to emphasize the Christian nature of the holiday, worth savoring slowly during the Christmas season.