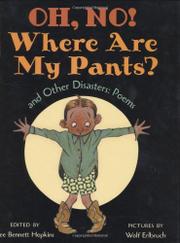 OH NO! WHERE ARE MY PANTS?

and Other Disasters: Poems

Fourteen modern poets, many of them lesser-known, present a selective catalogue of common incidents or fluffs that can haunt children, from missing a big catch or suffering a moment of stage fright, to mourning the death of a class rabbit. Mostly, though, the contributors keep the mood light—“Hello apple! / Shiny red. / CHOMP. CHOMP. / Hello worm. / Where’s your head?”—and so does Erlbruch, with scenes of solitary youngsters rendered in chalky pastels and, generally, placed against little or no background, hanging their heads or looking mildly dismayed. Hopkins’s title comes from “Nightmare” in Judith Viorst’s classic If I Were in Charge of the World and Other Worries (1981), a similarly themed match. Read aloud or alone, these plaints are sure to elicit winces of understanding. And, often enough, sympathetic laughter. (acknowledgments) (Poetry. 7-9)