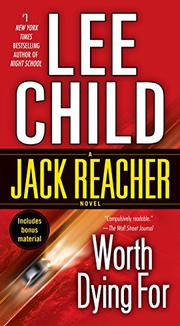 From the Jack Reacher series, volume 15

Whatever business Jack Reacher has in Virginia will have to wait till the world’s most distractible soldier of fortune cleans up the mess he’s stumbled into amid the cornfields of the Midwest.

After hitchhiking as far as Nebraska, Reacher minds his own business precisely long enough for the sozzled doctor sharing a hotel bar with him to get a call from a patient with a nosebleed. Forget about ignoring her, Reacher tells the startled medico. If she’s had nosebleeds recently, she may well be taking aspirin that’s thinned her blood and made it likely that she’ll keep on bleeding. Better to have Reacher drive him to Eleanor Duncan’s house so that he can see whether her husband’s been beating her. In the end, Eleanor’s nosebleed turns out to be inconsequential—it’s not even Seth Duncan who’s beaten her this time—but his perverse, aggressive, utterly characteristic stint as the good Samaritan pulls Reacher into the orbit of Seth’s father Jacob and Seth’s uncles Jasper and Jonas. Because they’re a tight-knit family, they don’t plan to take Reacher’s interference lying down. And because they’re engaged in criminal enterprise, their clients, already putting pressure on them for a mysteriously delayed delivery coming down from Canada, plan to go after this interloper themselves. In a flash, the ex-Army cop is the subject of a manhunt by the Duncans’ thugs, their Italian client’s thugs, the Italian’s Lebanese client’s thugs and the Lebanese’s Iranian clients’ thugs. With so many strong-arm types flooding the prairie, there are plenty of opportunities for violence, treachery and double-crossing—think of a Nebraska remake of A Fistful of Dollars with an international cast—and Child (61 Hours, 2010, etc.) doesn’t miss a single one. By the time he’s finally shaken the dust from his feet, Reacher will have plumbed the depths of a monstrous unsolved crime, cleaned up the county and killed a lot of mostly nameless guys who really deserved it.