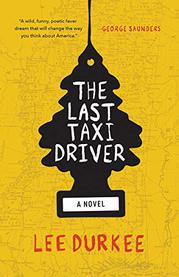 Durkee's long-awaited second novel (Rides of the Midway, 2001) is a black-comic delight.

Lou Bishoff is beset from all sides. After a promising debut novel that he's long ago ceased to imagine he'll ever follow up, he spent almost two decades in frigid Vermont (failed marriage, child-rearing, attendant despair). Now he's returned to his native Mississippi, where, after running through a succession of jobs, he's found a niche as a kind of knight-errant cab driver—Charon to meth heads, rehab escapees, elderly ICU refugees, and frat-boy monsters looking to score—in a college town (Gentry, a dead ringer for Oxford). But even this poor haven, a spavined, reeking, gas-guzzling Lincoln with a balky suspension and a "Shakespeare-mint" air freshener, is under imminent threat; Uber is set to arrive in weeks, the cab company owner's fugitive son has returned to town, and both Lou's back and his romantic life are in perpetual spasm. All this provides the setup for a remarkable one-day picaresque as we follow Lou on a marathon shift through a blasted landscape that's part Denis Johnson–ish carnival of the wrecked, part Nietzschean Twilight of the Gods (or Twilight of the Taxicabs). Lou is damaged, bitter, self-righteous, with a hint of Sam Spade masochism that one fare recognizes—yet the book's relentless grimness never seems either relentless or grim. Instead there's a comic sweetness and energy underneath that reminds one of Charles Portis. Lou has every reason for cynicism, but a dogged hope and playfulness, remnants of his studies in Buddhism and the influence of comedian Bill Hicks, keep pressing through; even when the car breaks down—and his body and every last structure of the world around him—he has the refuge of his considerable wit.