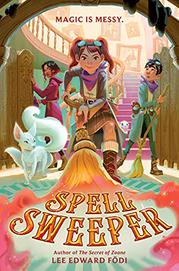 Such is the life of seventh grader Cara Moone, a remedial wizard with a bad attitude and a utility belt. Not only is she a MOP (Magical Occurrence Purger) at Dragonsong Academy, but her pink unicorn underwear and propensity for rule-breaking further cast her as a misfit. While cleaning up spell dust at several Magical Occurrence sites, Cara encounters a mouth-thingy that oozes black slime. While far from glamorous, her cleanup duties are a critical part of keeping Blisses, or ordinary mortals, happily (even blissfully) ignorant of the magical world that exists right under their noses. Joined by a three-tailed fox, straight-laced classmate Gusto, and an illegal magical pet, Cara must unravel the mystery of an unreliable teacher and her enigmatic—as well as popular and effortlessly cool—classmate Harlee Wu and stop the slime from destroying the Field of Magical Matter. Surprising revelations and plenty of humor keep the story fresh, and the good-vs.-evil plotline is nicely nuanced. A family tragedy and a sisterly rift bring some serious notes to the narrative, while scenes involving a dark magic cult lend sinister vibes. Cara is of Irish descent and reads as White; most other characters read as White with several ancillary characters, such as Harlee, whose surnames add presumed diversity.

A spirited and magical underdog story.