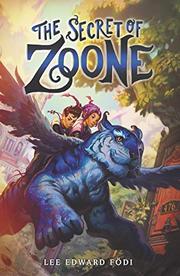 THE SECRET OF ZOONE

From the Zoone series, volume 1

This portal fantasy begins with a door to nowhere.

One uneventful day, a pipe bursts in Apartment 2B, where Oswald “Ozzie” Sparks lives with practical, orderly Aunt Temperance while his high-powered parents travel the world. Imaginative, lonely Ozzie sets off in search of creepy Mr. Crudge, the building’s caretaker, and stumbles upon a mysterious door. This door has “an energy about it,” and for some reason Aunt Temperance seems to have a key to it. A few days later, Ozzie arrives home to find a blue, curly-eared, winged, tigerlike creature called a skyger waiting for him. Telling Ozzie his name is Tug, he invites the boy to Zoone, the heart of the multiverse, where the Convention of Wizardry is about to commence and the secret of this world between worlds awaits. Using Aunt Temperance’s key, Ozzie enters, but the door explodes, leaving Ozzie with no way home. Though he’ll have guidance from Lady Zoone, the steward, Ozzie will need to discover the secret on his own. He’ll also find out he’s much braver than he thinks over the course of this rather contemplative adventure. Like many a magical world before it, Zoone is full of colorful characters. Even Aunt Temperance wasn’t always so “mundane,” as Ozzie learns. She appears to suffer from depression, which Ozzie understands as sickness. Tug has a disability among those of his kind: His wings don’t work. Capt. Cho, head of Zoone security, has brown skin; assume whiteness for other humans.

A promising start for a new series.