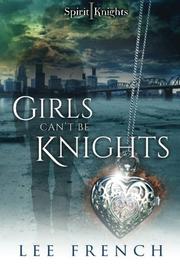 From the Spirit Knights series, volume 1

The start of a new YA series features a teen orphan and a protective brotherhood of Spirit Knights.

Fifteen-year-old Claire Terdan lives in a group foster home in Portland, Oregon. Six years ago, her family died in a house fire, and her only dependable friend since has been a boy her age named Drew. One day in school, after she punches a bully who mocks her, the principal suspends her for a day. She sneaks out of school and into town only to be accosted by several cats and dogs. Meanwhile, at the nearby Oregon Historical Society, a man named Justin arrives on his white horse, Tariel. He’s there, dressed in his green Spirit Knight armor, to borrow (some might say steal) an antique hat that has sentimental meaning to his mentor, Kurt. When he meets Claire, he offers her a ride home. Telling Justin she doesn’t have one, Claire ends up with him in Vancouver, Washington, at his family’s farm. There she meets his wife and two young daughters and eventually learns about the Palace, a magical, dormitory-style structure where Spirit Knights—a brotherhood that protects the world from ghostly, vengeful Phasms—dwell. Justin isn’t sure why Claire seems familiar until he learns that she’s the daughter of a dead Knight named Mark. French (Superheroes in Denim, 2016, etc.) establishes a crafty new fantasy series with a light smattering of genre fixtures, including talking animals, an enchanted pendant, and the firmly held belief that “Girls can’t be Knights.” Most of the narrative drama comes from grounded conflicts that teens should relate to, like Claire’s attraction to the older Justin and the lousy conditions of the “sanitized prison” that is her group home. Later scenes in which a detective named Avery physically assaults Claire are not for the faint-hearted. The upside for the tale’s heroine is that Justin and his family turn out to be perfect for her; despite early misgivings about them, she decides to “admire the example they set and be grateful for it.” The story should provide a heartwarming boost to anyone in a tough situation.

A clever, feel-good opening to a fantasy series with a tenacious heroine.