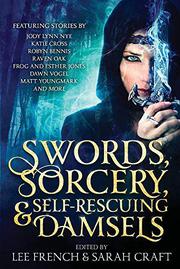 A spy in the service of the king returns to her old mercenary guild in order to solve the murders of four female warriors…and to confront her own troubled past. A mute slave working in the dungeons of a shadowy keep meets a priest and agrees to take the condemned man’s sword to his lover, though it means risking her life to cross a vast wilderness. A disabled girl is always the last one picked for games, despite the fact that she is the local princess, until some magic intervenes that turns the tables on all. In this collection of fantasy stories, the old archetypes are inverted and the women and girls who normally lack agency are placed center stage. The tone ranges from light to dark, and some entries even lean toward the hard-boiled-detective genre. One standout is “The Princess and the Dragon” by Robyn Bennis, which concerns a princess trapped in a tower who is conspiring with her dragon guard to win back her kingdom. “If one of those knights realizes it’s all a front,” warns the princess, “they could expose the whole operation.” Another is “Aptitude” by Matt Youngmark; the daughter of servants sneaks into the lord of the manor’s library to read his books only to stumble upon an attempt by a magical elf to rob it. The volume includes work by seasoned fantasists like Jody Lynn Nye, Raven Oak, Connie J. Jasperson, and Katie Cross as well as emerging talents like Edward J. Knight. Not every story is a home run, but the diversity of premises and worlds makes for a delightfully unpredictable reading experience. Though each interprets the anthology’s theme a little differently, this sentiment from Jasperson is representative of the volume’s self-assured, spellcasting ebullience: “Three weeks ago, I was a slave, afraid of shadows. Now I am Thorn Girl, friend of minotaurs and mages. Kerk was right. Inside of me is a woman who can do anything.”

A hoard of fantasy tales that proves damsels can be as dangerous as dragons.