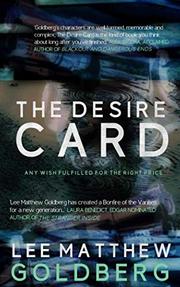 A high-stakes thriller focuses on a banker’s painful journey.

Money can’t buy happiness, but it can purchase liquor, prescription drugs, and a Fifth Avenue apartment with a Central Park view. For Harrison Stockton, that’s almost the same thing. But getting fired from his investment banking firm seems like rock bottom, especially when home offers only cold comfort from his kids, Brenton and Gracie, whom he barely knows after years of long nights away, and his wife, Helene, for whom he’s ceased to be good enough. But he quickly finds himself in the hospital with liver disease, one problem he truly can’t buy his way out of. With this setup alone, the novel could have come across as a simple parable, as Harrison gets his just deserts for taking his life of privilege and the wealth of possibilities for happiness for granted until it’s too late. Nevertheless, even in the early sections of the tale, Harrison is surprisingly sympathetic. While his “extracurricular activities” certainly will raise readers’ eyebrows, the vivid portrait here is not of an evil man but one torn between striving for his own advancement and providing for his family until a haze of pain-killing vice takes everything from him. Or almost everything. As part of his severance package, Harrison receives the titular Desire Card, offering “any wish fulfilled for the right price.” When his last hopes dry up and he’s cheated out of a black market liver, the Desire Card is all he has left. But the price for such a request is all too high, and the shadowy cabal behind the Desire Card begins threatening people he cares about. Harrison must make the ultimate choice between everything he could want and the people to whom he owes so much. Goldberg (The Mentor, 2017, etc.) delivers a thoughtful examination of human selfishness in this series opener. The moving story is a modern-day devil’s bargain, twisting and turning through an understandable fight for survival and a more complex view of the morality of a system where anything can be had for a price, a more literal and explicit version of the landscape readers live in each day.

A taut, emotional tale that portends an even deeper exploration of this world in the sequel.