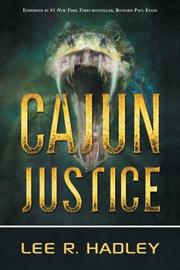 A batch of shirts bearing deadly serpents, obtained unethically by a shady businessman, spawns terror at a retailer convention in New Orleans.

In his supernatural novel, Hadley (Origins, 2015) introduces Alex “Jensen” McIntyre, a Northern businessman headed for a retail trade show in New Orleans. By chance, he winds up using a filling station deep in the Louisiana swamps and encounters a Cajun crone named Mothe’ Moses. Despite her remoteness from civilization, she shows Jensen an inexplicable inventory hidden in her hovel—boxes of high-quality cotton shirts emblazoned with frightful, beyond-photorealistic imprints of venomous snakes. Although admonished by Mothe’ Moses not to cheat her with a bad check, Jensen is tempted to do exactly that, and he takes the shirts to his business convention, where they are, naturally, an attention-getter. But, as Mothe’ Moses warned, dire consequences soon ensue, with victims going “into some kind of catatonic state,” appearing dead but eventually showing some “muted signs of life.” The local medics start to suspect some kind of fearful epidemic. But Jensen’s friend and colleague Bob (also arriving in town on business and attempting to restore his cooling marriage) realizes that the cursed garments and Mothe’ Moses spill over from scientific reality into the realm of voodoo mysticism. Unfortunately, this book shares a title with a reality TV show and a handful of B-movies; it’s actually a tastefully wrought paranormal tale with some vivid passages of Louisiana bayou description. Depending on their thirst for mayhem, genre fans may be pleased (or annoyed) that the author refuses to slather the material in shocking bloodshed or Deep South drive-in, horror-flick culture along the lines of regional efforts from Joe R. Lansdale or even Stephen King. One might even characterize the story as a spiritual one (The Shack II: The Revenge, anybody?), except that evangelical intent is not obvious (although moral instruction is). The voodoo element gets handled respectfully rather than pulpishly, and a hint at Mothe’ Moses’ true identity remains a nice touch. But the author’s decision to tell the story using multiple first-person narrators (and all in fairly uniform voices) tends to telegraph the fates of a lot of characters in advance—defanging the suspense, one might say.

A relatively restrained, old-style yarn of supernatural retribution and redemption that may leave gore-hounds feeling a bit disappointed.