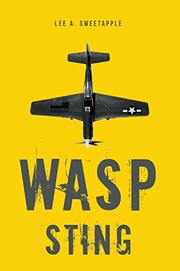 In this historical novel, a Women Airforce Service Pilot embarks on a dangerous mission during World War II to retrieve a Jewish scientist from Lithuania.

With no men to spare, women in World War II served in the Women Airforce Service Pilot program, ferrying and testing planes but not flying in combat. Trudy Andrich loves being a WASP: flying the fastest airplanes around is her dream job, and it keeps her so busy that she’s logged more flight time than many men. After she makes a successful dead-stick landing following a mechanical failure, her colonel calls her “the best pilot I have ever met.” That’s why she’s tapped for a secret mission called Project Stinger with Maj. Roderick Jackson, also a pilot. They must extract a scientist from within Lithuania whose research into the differentiation of species and biochemical codes could give the Germans (who would overlook his being Jewish) or the Russians a powerful weapon. It’s a complicated days-long plan involving dangerous flying in extreme cold, disguises, potential combat, and operatives who might or might not be trustworthy, including Rod. He’s attractive, appreciative of Trudy’s blond good looks, and a hero of Dieppe, but subtle clues raise doubts. The mission requires full commitment, giving Trudy every chance to prove her courage, resourcefulness, and flying skills—and just how much a WASP can sting. Sweetapple (Templar Codes, 2014, etc.) writes a well-plotted adventure, with excellent historical details, a lot at stake, and a true-blue American heroine. Getting out alive from her dead-stick landing, Trudy almost face-plants: “That would have been less than deluxe,” she says, brushing it off. Even minor characters come to life, like the lieutenant who actually volunteered for Greenland: “Back home in Alaska, we did the same things…and now I get army pay and free food to boot.” The detailed descriptions of aviation techniques can get lengthy, but the author does a nice job of tying them to specific elements of the mission, and they do serve to convincingly establish Trudy’s competence and authority.

A tight, exciting escapade with an admirable female aviator.