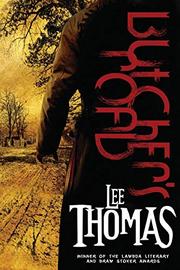 The life of an ex-wrestler–turned–Prohibition-era hooligan gets confusing when he’s sent on the run with a stolen mystical artifact.

Thomas (Like Light For Flies, 2013, etc.) has gained a well-deserved reputation for his keenly composed horror novels underscored with provocative masculine eroticism, and he delivers much the same here. In a blend of genres, his newest combines gritty Prohibition-era gangster violence with a paranormal conspiracy about a collection of powerful mythic objects. The book’s nominal hero is Butch Cardinal, an aging former carny wrestler who has stooped to serving as mob muscle in Chicago, despite having a strong personal code of honor. On a milk-run assignment to pick up a package from lowlife Lonnie Musante, the meet is ambushed, and Butch finds himself on the run with a strange tin crown known as the Galanus Rose. Making his way to New Orleans, he lays low with Hollis Rossington, a club owner and fellow former wrestler with whom Cardinal shares an uncharacteristic but not wholly unexpected physical attraction. Back on the street, Butch learns about the Alchemi, a secret society sworn to protect and secure objects like the Rose, which has curative powers. He tangles with two cunning agents of the Alchemi, a police detective from Chicago and an aging hit man who hopes to cure his ailing wife with the talisman. Thomas gleefully captures the hard-boiled setting in a propulsive story that reads like Frank Miller’s Sin City with a little slap and tickle here and there. “Laws were bent, broken and ignored because these men had power, because they had money. Humanity meant nothing,” Thomas writes. “Logic and honor and compassion were cheap commodities, easily traded for petty comforts and distractions. The only things that mattered were guns and knives, silver and gold. A human being didn’t stand a chance in a world that worshipped metals.”

A well-crafted noir story that reads like The Untouchables by way of Stephen King.