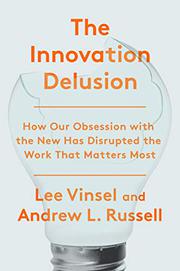 A potent challenge to “the superiority of the innovation mindset.”

As professors Vinsel and Russell write in this vibrant, sure-footed argument, the digital economy rests, in part, on the “demand for rapid growth that disrupts the com­fortable incumbents of the status quo.” For many, this attitude, characterized by creative disruption, has spread from the economy to become a way of life. Innovation is important, of course, but the concept of “move fast and break things…can be lousy guidance for anyone who builds or designs actual things.” The authors argue that it is time to challenge the unholy marriage between Silicon Valley’s ideology of change for change’s sake and Wall Street’s insatiable appetite for immediate profit; instead, we must attend to the areas of infrastructure and maintenance. Vinsel and Russell point out that innovation—the profitable combination of new and existing knowledge—is not the enemy. The problem is “innovation-speak,” a misleading “sales pitch about a future that doesn’t yet exist.” Innovation-speak flourishes in a society that values the individual accumulation of wealth above the common good. Maintenance, though essential to any functioning society, is often neglected, thus disrupting order in a variety of forms, whether it’s the physical infrastructure of roads and bridges or the simple ability to maintain a healthy populace. The authors guide readers with clear and contemporary examples of when deferred maintenance led to either slow or fast disaster, both of which are dangerous. “A slow disaster…is the accretion of harm from incremental neglect,” they write. “It happens when children ingest chips from lead paint or when a potholed road becomes unsafe for traffic.” The authors also thoroughly expose the unjust hierarchy that leaves maintenance workers at the bottom of the pay scale. We need a systematic approach, they argue, to monitoring and caring for our resources, encouraging sustainability and shared skill sets. Maintenance sustains success, and an ounce of prevention is still worth a pound of cure.