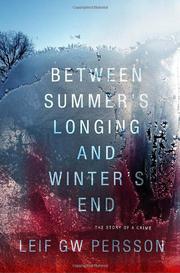 BETWEEN SUMMER'S LONGING AND WINTER'S END

The Story of a Crime

Engaging Swedish whodunit, the first of a trilogy—reminiscent of the work of Henning Mankell and Stieg Larsson in its toughness, and just as cynical in its politics.

A story that begins with the brutal death of a deaf dog may not be entirely promising, at least for the animal lovers in the audience, but that memorable episode suits Persson’s purposes just fine: Though leafy and full of nice wood furniture, Sweden, suggests the author—in his spare time a psychological profiler for the national police—is full of unhinged folks who would not think twice about committing such dastardly deeds as dispatching “an admittedly old Pomeranian” by means of a falling body who just happens to be an American of some interest to the international community. But homegrown loonies don’t hold a candle to the assorted nutcases and psychopaths filling the ranks of the security forces of the superpowers, as with one CIA officer who once haunted the Stockholm embassy while nursing anti-Semitic grudges, brooding about better times and hoarding scrap metal. Ah well, shrugs the lead investigating officer, “This country is full of crazy people who collect such things.” The case gets ever uglier, and if the spooks are nasty, the Stockholm cops charged with hunting down the usual suspects are decidedly incompetent. The main character is a world-weary exception, a police superintendent who seems to be living for retirement, showing “disturbing signs of wavering conviction since he’d left the field campaign against criminality to take it easy behind a series of ever-larger desks.” Laced with irony and satire, Persson’s tale takes a serious turn straight from the headlines of yore with a plot to remove a popular prime minister from the scene.

“What fucking people there are and what fucking lives they live,” reflects one grim flatfoot. Just so. Persson does a fine job of pitting one desperate soul against another in a philosophically charged tale worthy of Ingmar Bergman—but with lots more guns.