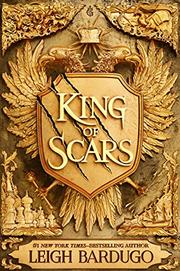 From the King of Scars Duology series, volume 1

In this Grishaverse novel, King Nikolai struggles to keep his kingdom afloat in a destabilized, rapidly changing world.

Though Ravka’s civil war ended three years ago, Ravka still faces threats both domestic—pretenders to the throne, policies that are popular with commoners but anger nobility—and external—old enemies like Fjerda, debts owed to Kerch. Worse, for the past 6 months Nikolai has been struggling with an enemy inside himself: The monstrous curse thought ended by the death of the Darkling re-emerges when he sleeps, posing a danger to his people, crown, and soul. With traveling becoming too risky given his secrets, Nikolai and his inner circle hatch a display of strength that will bring the other powers to him for diplomacy, using the cover of his seeking a queen. Meanwhile, in the months since the end of Crooked Kingdom (2016), grieving Nina has returned to Fjerda on a mission to rescue and recruit Grisha. Following the call of her changed abilities, she’s drawn to an area with poisoned waters and a mysterious factory holding dark secrets. Multiple romantic storylines among the multiethnic cast develop organically and don’t pull the focus away from keeping up with the plots. Strategically-deployed backstory makes already likable characters even more compelling; international political developments (especially with Grisha experimentation) are woven seamlessly in with the epic themes.

Will leave readers begging for the sequel.