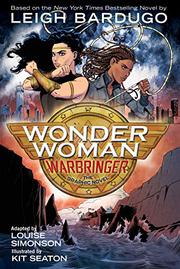 Diana was molded from clay by her mother, Hippolyta, and given life by the goddesses. Because she was made and did not earn her place in Themyscira, Diana is determined to prove herself to her mother and her fellow Amazons by winning the race to Bana-Mighdall. Midway through the race, Diana witnesses a ship exploding and sets aside her desire for victory to save a girl, Alia. When Alia’s presence on the island wreaks havoc, Diana learns she is a Warbringer, cursed to bring death and destruction everywhere she goes. Diana and Alia flee Themyscira, return Alia to New York City and, with the help of Alia’s brother and two of their friends, work to break the curse. The introduction of necessary background information doesn’t always flow well with the conversation bubbles, and red-outlined text boxes showing Alia’s thoughts feel insufficient for the introduction of a second narrator. Well-paced and funny, where this adaptation stands out is in the illustrations that show people of color in a nuanced way. The cast is diverse—Diana appears white, Alia and her brother are biracial (black and Greek), their two friends are cued as South Asian, fat, and queer and Afro-Latinx respectively. Readers need not have read any other Wonder Woman stories to enjoy this one.

Diana’s lasso of truth shows this one is a winner.