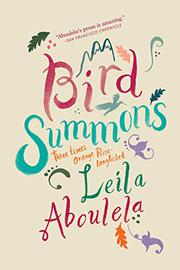 Three members of a British Muslim women’s group travel north to the Scottish Highlands, where their individual preoccupations turn increasingly surreal, leading them to redefine their attitudes and their futures.

Talking birds, phantom children, and physical metamorphoses are just a few of the surprises in this latest novel from an Egyptian-born writer who has previously used a more realistic style to explore the dilemmas of Muslim women often stranded between cultures. Aboulela (Elsewhere, Home, 2019, etc.) does begin her new work in recognizable territory, depicting a trio of friends who share a religion and immigrant background, but gradually proceedings shift into a more fantastical place. Salma, married to Muslim-convert David and mother to four British children, has enjoyed the most freedom, yet she fantasizes about the life she might have had in Egypt and is enjoying a risky phone dialogue with Amir, the man she didn’t marry. Moni is neglecting and endangering her marriage by devoting herself exclusively to the care of her son, Adam, who has cerebral palsy. Iman, youngest and prettiest of the three, yearns for a child but has just been rejected by her third husband and is now homeless. During a week together in a remote loch-side cottage, the women pursue private paths: Iman wears peculiar costumes and communes with a fable-sprouting Hoopoe, a sacred bird; Moni befriends a silent child who suddenly begins to grow alarmingly, like Alice in Wonderland; and Salma chases Amir through the woods. All three suffer painful physical alterations and journey through testing landscapes, but their friendship, previously fraying, helps sustain them until the Hoopoe leads them back. Aboulela’s exploration of the women’s problems of choice, faith, and commitment are as immersive as ever, but her dreamscapes, while imaginative and disconcerting, seem to sit oddly, at one didactic remove from the story.

Split between two different narrative modes, Aboulela’s latest is both engaging and perplexing.