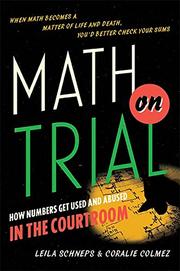 How Numbers Get Used and Abused in the Courtroom

Chronicles of miscarriages of justice due to the misuse of statistics, combined with blow-by-blow accounts of criminal trials.

Schneps and Colmez are a mother-daughter pair sophisticated in the ways of probability. Schneps studied math at Harvard, and her daughter has a math First from Cambridge; both are members of an international team dedicated to improving the use of statistics in the courtroom. Many of their accounts will make readers weep with rage—e.g., a mother imprisoned for murder in the deaths of her two infant children, largely based on the false assumption that the deaths were independent events, so the likelihood that they happened by chance was vanishingly small; an interracial couple convicted of robbery based on multiplying a bunch of inaccurate probabilities of nonindependent descriptors (black man with beard: 1 out of 10; man with mustache: 1 out of 4, etc.) to conclude that only the defendants fit the bill. The testimony of “experts” in all these cases inevitably overwhelmed the jury and brought the guilty verdicts. Fortunately, the cases were overturned on appeal when true experts explained errors and/or presented new evidence. The authors move on to more subtle applications of probability theory and fill out the volume with wonderful accounts of frauds and forgeries involving the likes of Charles Ponzi, Hetty Green and Alfred Dreyfus. Interestingly, the authors cite Harvard’s Laurence Tribe, whose decades-old essay decrying the use of math in the courtroom led to a decline. Now, because of DNA testing, probability has made a comeback. How it was applied—and eventually ignored—makes the authors’ analysis of the recent Amanda Knox case particularly chilling.

Required reading for aspiring lawyers, but also intrinsically fascinating in its depiction of the frailty of human judgments.