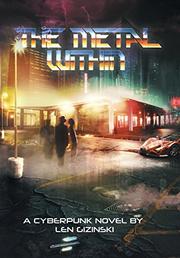 In the opening installment of debut novelist Gizinski’s sci-fi series, survivors in a dystopian world encounter a covert organization that targets threats to citizens.

Jack Mathews lives in what remains of the mid-21st century United States, which has been ravaged by missile strikes, riots, and civil wars. He preaches at his own church, and although gangs are prevalent in the decimated country, Jack is on relatively good terms with members of the Razors. He hopes that they aren’t the ones pushing a dangerous street drug called Diamond. Meanwhile, private eye Melissana Trellan has taken on a new client: Elaine Martinez, wife of Justin Martinez. He’s known as “The Man Who Saved the World from Extinction” because his company developed synthetic foodstuffs to counter mass starvations resulting from the Grain Blight of 2029. Elaine thinks that her husband is cheating on her, but Melissana discovers some other information that may put Justin in peril. In a concurrent storyline, Corey Martin, in his late father’s armed-and-armored Sabretooth, makes his way to the Fortress Town of Hagerstown, Maryland, with a woman named Susan Blakeslee. They’ve been fleeing Iron Mike and his Steel Jackals ever since Corey saved Susan from them; the gang’s determination to ensnare the couple soon incites the townspeople to protect their home. Enter a clandestine agency with the resources to combat such menaces, which aims to recruit skilled people by whatever means necessary. Gizinski ably establishes his characters and the harrowing world in which they live; for example, just because Melissana’s pal Josanne Sinclair has aspirations to be an investigative journalist doesn’t mean that she isn’t also trained in self-defense and firearms. Most of the initial action is reserved for Corey and Susan alone, who find themselves in exhilarating predicaments, such as a high-speed pursuit and the aforementioned Hagerstown standoff. Details about the secret organization come much later, but the author saves some space afterward for characters to train, learn new tech, and even actively go after bad guys. There’s also a few surprises, including revelations of a villain’s identity and of a character’s pre-existing link to the covert group.