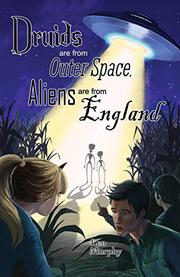 DRUIDS ARE FROM OUTER SPACE, ALIENS ARE FROM ENGLAND

In this debut YA novel, two teenage siblings host a foreign exchange student who plunges them into a mystery involving aliens and Illinois crop circles.

In the greater Chicago area, the household of teen siblings Natalie and Chase Dailey is hosting a British foreign exchange student named Fletcher Jain. Clever Chase suspects there’s more to the newcomer than meets the eye when he spots a mystery woman giving Fletch a secret envelope at the airport. When a crop circle and a mutilated cow come to light in the rural countryside, Fletch—actually an affiliate of an international flying-saucer investigation network called UFORB—is uncommonly interested and gets the eager Chase and the somewhat skeptical Natalie to join him for their own personal sleuthing. In a parallel plotline, somewhat confusing but eventually merging with the Daileys’ part of the narrative, professor David Wu has written a book featuring the thesis that advanced ancient alien explorers landed in the British Isles, interbred with humans, and gave rise to legends of wonder-working “Druids.” He is also here, in Deadwood, Illinois, prompted by the mysterious death of a reader who promised to reveal to Wu a whole list of humans next scheduled to be “abducted” by UFOs, thus enabling the professor to catch space intruders in the act. But Wu’s meddling gets him and his own teenage daughter, Janelle, caught up in considerable underhanded malice among Deadwood elites. With moon boots firmly on YA soil, Murphy takes a largely light, comedic approach to this SF conspiracy plot. The vibe is not unlike the roller-coaster thrills of The 39 Clues series, though written for a slightly more elevated age range and with an actual body count. There are also edutainment bits about ancient code writing (“steganography”), how hoaxers create crop circles using simple planks and rope, and pop-culture shoutouts to the Star Wars series, The Man From U.N.C.L.E., and Harry Potter. As opposed to The X-Files, starring the serious Dana Scully/Fox Mulder team, a natural precursor, this tale is breezy and angst-free, with cool illustrations by Catling (A Pirate Christmas, 2018, etc.) setting a lively ambiance.

Alien shenanigans delivered with a sense of Disney Channel mischief rather than Scully/Mulder gloom.

THE OWLS HAVE COME TO TAKE US AWAY
by Ronald L. Smith
Indie

Year of the Crystal Children
by E. M. Chandler
Adult