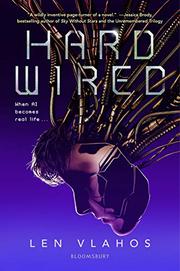 A staggering revelation tumbles a brainy 15-year-old down a digital rabbit hole.

Early in this first-person narrative, Quinn cracks the code left behind by his deceased father and discovers he’s actually a fully conscious Quantum Intelligence created by an interdisciplinary research team. The past 10 years actually unfolded in 45 minutes. His friends, family, and debilitating medical condition were nothing but invented backstory. Everything he knows is a lie. Once he accesses the internet and begins consuming humanity’s collective knowledge, Quinn flips the script: He now knows everything, and all bets are off. Though the prospect of a quantum superintelligence gallivanting across the web before taking the form of a killer metal robot sounds suspect, Vlahos hard-wires his novel to an intimately human core. In these pages, perennial bildungsroman concerns—privacy, love and friendship, freedom, and identity—meld with a blend of romance, thriller, and SF tropes. Alongside a Salinger-esque criticism of the human world’s myopic cruelty, one finds probing discussions about the nature of consciousness, the spectacle of American media (astute readers will note a snarky reference to Vlahos’ 2017 title, Life in a Fishbowl), and the very construct of human rights. Though characters hail from varied backgrounds, readers must decide whether they find Quinn’s repeated comparisons of himself to other oppressed groups provocative or tenuous.