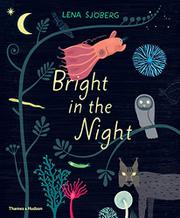 BRIGHT IN THE NIGHT

“When night falls, everything is dark. Or is it?”

In this Swedish import, Sjöberg suggests that viewers look again, and against pitch-black backdrops she casts sprays of stars and curtains of ionized northern (and southern) lights across night skies, glimmering fish and other marine creatures in shallow or deep-sea settings, lambent residents of otherwise lightless caves, fungi and even birds glowing eerily in ultraviolet light, and empty city streets faintly lit by windows and streetlights. Mainly she focuses on the natural world, presenting views of astronomical phenomena, ranks of fluorescent minerals, and dozens of biofluorescent or bioluminescent creatures. These include fire centipedes and certain shrimp that cast glowing nets of slime as a defense, the reflective eyes of cats and deer, puffins with UV–reactive beaks, luminous earthworms, toothy anglerfish, and, in the near future perhaps, glowing trees and textiles. Sjöberg occasionally plays fast and loose with facts—a star will last for a bit more than “thousands of years,” and there actually is a natural explanation for swamp lights. As well, the survey presents readers with a visual challenge by presenting much of the narrative in tiny, dim type. Still, while feeding scientific interest, the author effectively makes a comforting point that for all its feeling of scary mystery, the dark is rarely, if ever, absolute.

An illuminating look at the dark’s wonders, both informative and atmospheric.