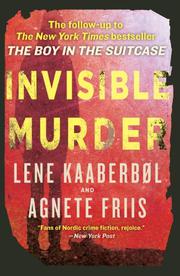 Denmark’s normal cycle of stealing, smuggling, forced prostitution and unauthorized aid to minority populations is disrupted by the exhumation of a truly malign object.

Jørgen Skou-Larsen is a retired building inspector concerned about his wife Helle’s thoroughly irresponsible financial behavior. Sándor Horváth is a law student from Budapest obsessed with passing his upcoming oral exam. Søren Kirkegård is a chief inspector in counterterrorism. And Nina Borg, familiar to American readers from The Boy in the Suitcase (2011), is a Red Cross nurse working in the Coal House Camp and secretly moonlighting with the underground Network that does what it can to ease the lives of the Roma who’ve found their way to Denmark. The first hints of trouble come with shocking suddenness: Nina’s fellow Networker, Peter Erhardsen, an engineer with the city of Copenhagen, is taken violently and mysteriously ill with a malady that seems to have swept through the Roma community, and Sándor is arrested by police officers who are clearly convinced that he’s his stepbrother, Tamás Rézmüves. The source of these problems is a sinister prize Tamás and his pal Pitkin have scavenged from an abandoned hospital building back in Hungary and arranged to sell in the global marketplace. Their scheme entangles not only them, but the rest of the cast with international sex traffickers and homegrown terrorists, pits each group of do-gooders against the others, and puts Nina and her family in particular under unimaginable pressure from some uncompromisingly evil malefactors. The pattern behind the calamity becomes clear early on, but the final indications of how the puzzle pieces dovetail will hit most readers as a shocking surprise.

More grisly but more routine than Kaaberbøl and Friis’ striking debut, and just as sordid in its revelations about Denmark today and tomorrow.