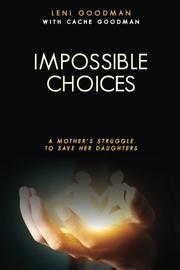 A Mother's Struggle to Save Her Daughters

In this memoir, a former aspiring actress chronicles her transformative journey dealing with a daughter’s brain tumor and a later-in-life foreign adoption.

In 1972, depressed and financially dependent on a husband she was in the process of divorcing, Goodman, then 35, was told that her 5-year-old daughter, Julie, had a brain tumor and likely only six months to live. Julie underwent brain surgery and radiation treatment, then chemotherapy, leaving her neurologically disabled. Defying doctors, Goodman tried patterning, a controversial therapy of manipulating body parts to stimulate motor development. She recruited volunteers to help perform this work in her New York City apartment, and Julie lived, with some improvement, for another 20 years. Goodman also realized she was gay; she had one long-term lesbian relationship and eventually abandoned her “frivolous dream of being an actress” for a new career as a hospital counselor. In her 50s, Goodman, once again single, adopted Cache, a 3-year-old girl from Guatemala, who ended up having behavioral issues due to early childhood abuse and, later, sexual trauma as an 11-year-old. Goodman sprang into action, sending Cache to wilderness camp and boarding school. While Goodman remains unsure of these decisions, Cache, whose writings are excerpted in this narrative, is now back home and exploring a makeup artist career. In her often heartbreaking account, Goodman makes note of the cantor’s reference at Julie’s funeral to the Jewish legend about “a mother who did everything possible to keep her child alive.” Goodman is indeed living proof of such dedication, an example to parents everywhere to stay engaged in their children’s care. Though at times digressive with extraneous personal detail, Goodman is also refreshingly honest about the hardships in her life. “I…was always amazed that there was more screaming left,” she says about her primal scream therapy. Among her range of experiences—Julie, Cache, her sexual identity—each episode could be the subject of a more finely tuned memoir. This impressive individual, however, has certainly earned the right to tell her story in its totality.

A thoughtful, multithemed autobiography focused on the challenges of motherhood, with particular insight into health care advocacy.