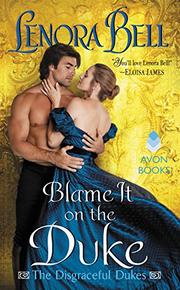 BLAME IT ON THE DUKE

One gamble leads to another.

Nicholas Hatherly is a rake who doesn’t gamble, but gambling has ruined his life anyway. When the future Duke of Barrington learns that his mad father has lost him to the ruthless Alfred Tombs in a card game, and he has been promised as a husband for Tombs' daughter, he immediately plans his escape. For her part, Alice Tombs isn’t much happier than Nick to hear the news; having spent the previous three seasons avoiding marriage, freedom was nearly in her grasp and, with it, the ability to travel abroad to her heart’s content. Sensing an opportunity, Nick and Alice agree that they will marry, spend one summer together, and then head their separate ways. Nick, convinced he is genetically doomed to go mad soon, and Alice, who has secretly been translating the Kama Sutra, marry quickly and start to enjoy their brief wedded bliss. Soon, their passionate evenings leave them wondering whether there could be something more than a few months between them, and both must decide whether their solo plans for the future are worth sacrificing for each other. With the third book in the Disgraceful Dukes series, Bell (If I Only Had a Duke, 2016, etc.) has written a marvelous variation on the traditional marriage-of-convenience story. In particular, Nick and Alice’s relationship outside the bedroom adds serious heat to an already spicy pairing. As Nick realizes he finds Alice’s wit as compelling as her beauty and Alice discovers a secret mission that Nick has been pursuing for years, their mutual admiration adds believable depth to the rapid development of their relationship. Thoughtful exploration of mental health treatment in the Regency era rounds out this satisfying and intelligent romance.

A historical romance as tantalizing as the Kama Sutra epigraphs at the beginning of each chapter.