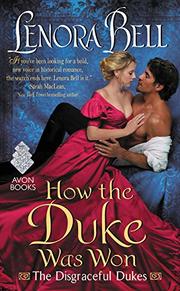 HOW THE DUKE WAS WON

One proud duke, four desperate women, and a weekend full of surprises.

Charlene knows her place—she’s the by-blow of the Earl of Desmond—and all she dares hope for is a better life for her family. Her father’s wife has offered her what might be her only chance to change their lives. Charlene looks just like her half sister, Lady Dorothea, who's busy traveling, which means Lady Desmond wants to train Charlene to stand in for Dorothea and help charm the Duke of Harland into marrying her. Charlene needs to use all of her talents to reach James, aka His Disgrace, who’s bringing four women to his country house for a weekend in order to find a suitably proper wife (with suitably powerful father) who can give him an heir and restore his reputation. True love isn’t his aim; he only cares for his cocoa farm in the West Indies, where he’s abolished slavery, and his only goal is making chocolate affordable for everyone in England. Over a weekend of pratfalls, with Lady Desmond urging her on from the sidelines, Charlene falls for the duke despite herself, and the duke falls for “Lady Dorothea.” When Charlene secures a betrothal, her work is done—but the duke might not be fooled so easily. Bell’s debut romance is as fierce as Charlene’s self-defense skills and is full of surprises. The duke’s proto–social justice leanings add a new angle to this spicy romance and will delight fans of the genre. Bell has found a new avenue to the happily-ever-after of the Regency era, and it’s one that fans will enjoy exploring.

Bold and sweet as good chocolate, this debut romance will give Regency fans a new author for their must-read list.