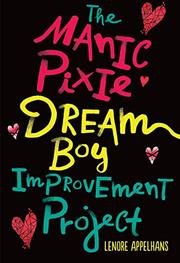 Riley is TropeTown’s second-ever Manic Pixie Dream Boy—a subset of the Manic Pixie Dream Girl trope. After twice deviating from his script on a job, the Council assigns Riley to mandatory group therapy with a motley crew of Manic Pixie Dream Girls. There, he falls for Zelda, of the Geek Chic subtype, and finds an unanticipated group of friends. However, something’s not quite right in TropeTown, and Riley has to decide if he is willing to risk termination to learn the truth about TropeTown and protect the Manic Pixies. Underdeveloped worldbuilding and a general lack of subtlety leaves elements of characterization and plot unsatisfying. There is plenty of discussion about the concept of Manic Pixies, but any attempted critique is undermined by the continued centering of Riley, a male character who finds himself through the help of secondary women characters. Barely-veiled digs at John Green’s many Manic Pixies abound; a painfully self-conscious discussion arises between white characters exploring the similarities and differences between Manic Pixies and racist tropes like the Magical Negro as well as the benefits and detriments of tropes as representation. A few of the women characters have been in same-sex relationships, and characters default to white.

Ultimately, just as frustrating, underdeveloped, and problematic as the trope this novel tries to interrogate.