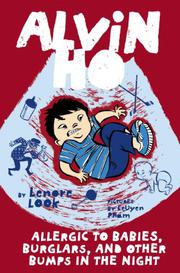 Allergic to Babies, Burglars, and Other Bumps in the Night

From the Alvin Ho series, volume 5

Alvin Ho’s lovable, quirky family is due to increase by one in this fifth installment of the warmly funny series, which again features vibrant, playful black-and-white illustrations by Pham. Though his mom assures a dubious Alvin that she told him months ago about her pregnancy, his new sibling’s imminent arrival introduces a whole new set of worries for nerve-wracked Alvin. Paramount among them is his misunderstanding that the “simply pathetic” (read: sympathetic) pregnancy his mother suggests he’s experiencing will result in him actually giving birth. Described in short, dialogue-driven chapters and in keeping with the enjoyably over-the-top tone that has come to define the ongoing story, Alvin’s anxiety (which includes an inability to speak at school) creates a host of situational comedies that the adults in his life must help him resolve. Alvin’s father’s absence due to a business trip is notable in this latest, and it results in Alvin’s leaning more heavily on his older brother, Calvin, whose current interest in Rube Goldberg devices makes for some predictably hilarious solutions to problems. The ending glossary, also a fixture of the series, offers creative definitions of terms as diverse as dim sum and nor’easter.

Alvin’s excitable, first-person narration, replete with his realistic attempts to make sense of what he doesn’t understand, will again infect readers with its goofiness.