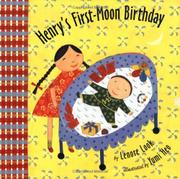 Baby Henry is celebrating his one-month birthday, with everyone in his Chinese-American family making extensive preparations for the festivities, especially his big sister, Jenny, and their grandmother, Gnin-Gnin. Look (Love as Strong as Ginger, 1999) tells the story in present tense with Jenny as the narrator describing all the special foods and decorations, guests, and presents that make the traditional celebration part of her family heritage. Her grandmother skillfully involves Jenny in all the preparations and gives her the extra dose of love any new big sister needs. The story is rather flighty and episodic, but since a bright, take-charge little girl is the narrator, perhaps that is just realistic fiction. Heo’s (Yoshi’s Feast, 2000, etc.) delightfully naïve illustrations perpetuate the notion that Jenny is in charge of this story, both in words and in pictures, and the flat perspective and whirling background details of the pencil, oil, and collage illustrations offer a cheery, child-like view of Jenny’s world. Bright, colorful, busy, and jumpy (just like real life in any happy household with a healthy newborn), this story will be of special interest to Chinese-American families and to parents of adopted Chinese children, but has universal appeal. (glossary) (Picture book. 4-8)