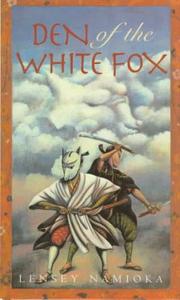 DEN OF THE WHITE FOX

Set in 16th-century feudal Japan, a slow, uninvolving episode in the adventures of two wandering samurai previously met in Namioka's The Coming of the Bear (1992). A mysterious figure in a white fox mask is fomenting rebellion in a misty, newly annexed valley—intending, it turns out, not to throw out the small occupying force, but to steal its payroll and leave the locals to their fate. Enter unemployed ronin (masterless samurai) Zenta and Matsuzo, who discover that they've been cleverly maneuvered only after helping with the heist, but do manage to recover the gold, thus saving the valley's residents from slaughter. The contrast between impulsive Matsuzo and his crafty, saturnine mentor Zenta plays as well as ever, but that's all that works here: The pace never picks up after the hookless, sluggish opening scene; readers expecting suspense, heroics, authentic atmosphere, or at least some action will come away disappointed; and the fleeting appearance of a second, possibly supernatural White Fox is as forced as the attraction that develops between Zenta and Kinu, daughter of a once-noble clan and the valley's secret jujitsu instructor. The criminal mastermind's escape at the end implies his return in future adventures, but the series is plainly running out of steam. (Fiction. 11-13)