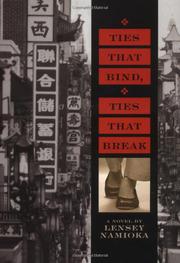 Namioka (Den of the White Fox, 1997, etc.) offers readers a glimpse of the ritual of foot-binding, and a surprising heroine whose life is determined by her rejection of that ritual. Ailin is spirited—her family thinks uncontrollable—even at age five, in her family’s compound in China in 1911, she doesn’t want to have her feet bound, especially after Second Sister shows Ailin her own bound feet and tells her how much it hurts. Ailin can see already how bound feet will restrict her movements, and prevent her from running and playing. Her father takes the revolutionary step of permitting her to leave her feet alone, even though the family of Ailin’s betrothed then breaks off the engagement. Ailin goes to the missionary school and learns English; when her father dies and her uncle cuts off funds for tuition, she leaves her family to become a nanny for an American missionary couple’s children. She learns all the daily household chores that were done by servants in her own home, and finds herself, painfully, cut off from her own culture and separate from the Americans. At 16, she decides to go with the missionaries when they return to San Francisco, where she meets and marries another Chinese immigrant who starts his own restaurant. The metaphor of things bound and unbound is a ribbon winding through this vivid narrative; the story moves swiftly, while Ailin is a brave and engaging heroine whose difficult choices reflect her time and her gender. (Fiction. 9-14)