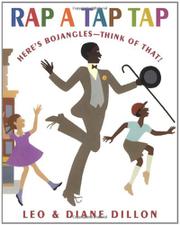 A tribute to Bill “Bojangles” Robinson captures the rhythm of the famous tap dancing he did all over the city: in the street, behind doors that were both open and closed to him, in crowds, in upscale neighborhoods as well as “the skids,” in the park, and ultimately, on stage. Watercolor illustrations in sophisticated shades of tan, plum, aqua, mustard, olive, rust, black, and gray recall the pre-WWII era in which Robinson lived and danced. The stylized figures, shown mostly in profile without detailed features, are reminiscent of Synthia Saint James’s work and stand out cleanly against a bright white background. The contagious, joyful exhilaration of Bojangles’s dance is conveyed through shadowy legs surrounding his real ones, as if the rapt onlookers’ eyes could not keep up with his frenetic movement, as well as the rhyming text that begs to be read aloud and repeated. A note at the end explains who Bojangles was and includes fascinating information about his life and his talent, including the fact that no other dancer was ever able to repeat some of his more intricate steps. Spectacular, clear design includes spot varnish on the cover, highlighting the colorful type and figures against a matte white. This jazzy introduction to an important contributor to American culture will entrance the youngest music and dance fans. (Picture book. 3-7)