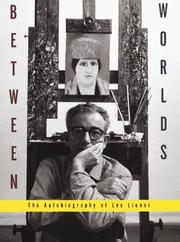 The Autobiography of Leo Lionni

An uneven but rewarding autobiography that records not only how this artist has lived, but, at its best, how he sees. The octogenarian Lionni has been an artist, graphic designer, and children's book author. His upbringing in several countries—Holland, Belgium, the US, and Italy—left him fluent in several languages but with "no mother tongue." The result is a book that often feels translated—like Nabokov without the verbal genius. The detailed record of his European youth is sometimes moving but frequently overinflated, as when he exclaims, "Great excitement in early fall when Father became a full-fledged certified public accountant!" However, the narrative is consistently strong whenever it connects to Lionni's true calling, the visual arts. He shows how artists see differently from other people—for example, in being able to remember "the specks of mica flickering in the sand, the fold of lichens on a stone." He speaks with insight and affection about 20th-century painting (raised among avid art collectors, he became familiar as a child with the revolutionary work of Chagall, Klee, Kandinsky, and Mondrian). Above all, in recounting his journey from bohemian in Mussolini's Italy to upwardly mobile American art director to his rediscovery of his artistic roots via painting and children's books, he lays bare the moral choices an artist confronts. Turning down a lucrative job offer that would have locked him into an advertising career, he writes, "I had defended myself from the threat of a predictable future." The end result is a feeling of triumph that he successfully ventured into so many fields—painting, sculpture, ceramics, photography, and criticism. Though Lionni's prose is not as accomplished as his visual work, his autobiography inspires admiration that the artist has tried—and largely succeeded—in yet another form.