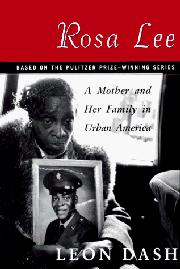 A Mother and Her Family in Urban America

A family caught in the maelstrom of the urban underclass made devastatingly human in an amplified version of a Pulitzer Prizewinning newspaper series. Washington Post staff writer Dash (When Children Want Children, 1988) had virtually no bylines from 1990 to 1994. Instead, he spent countless hours with Rosa Lee Cunningham and the many members of her family with whom she shared an addiction to drugs and crime. Interviews took place in the various jails to which one family member or another was consigned, in the North Carolina county where Rosa Lee's grandparents were sharecroppers before moving to Washington, D.C., in 1935, and in bedrooms while someone was shooting up. Dash accompanied Rosa Lee to methadone clinics, emergency rooms, funerals, and court hearings. The result is a glimpse into a strange and horrifying netherworld where poverty, illiteracy, and behavior destructive to self and society are passed on from one generation to the next. But what makes this book remarkable is that we come to know Rosa Lee as a human being, someone who could have been much more than the woman who died of AIDS in 1995 at age 59. Several of Rosa Lee's brothers and sisters and two of her eight children escaped the world of drugs and poverty, and Dash does not absolve Rosa Lee of blame for her many bad choices. Neither, however, does he absolve American society from its guilt for offering people like Rosa Lee, an illiterate black woman born into grinding poverty, so few options from which to choose. ``She was caught up in a tragedy for which . . . she was partially at fault, but, at the same time, one that was foreordained,'' he writes. Dash's epic achievement makes Rosa Lee's story understandable as an American tragedy. Rosa Lee's warm human face is a vital contribution to the public policy debates that almost universally reduce the urban underclass to grim statistics. ($50,000 ad/promo)