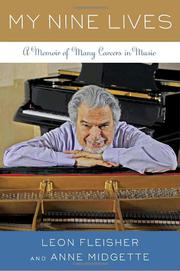 A Memoir of Many Careers at the Keyboard

The legendary American pianist recounts the many stages of his storied career.

With its soaring highs and sweeping lows, the story of Fleisher’s life, deftly unveiled here with the help of Washington Post classical music critic Midgette, is as grand as any symphony. Now in his 80s, the author began playing piano in San Francisco at age four, gave his first public recital at eight, debuted with the New York Philharmonic at 16, won the prestigious Queen Elisabeth competition in Brussels in 1952 and made seminal recordings of Brahms and Beethoven with George Szell and the Cleveland Orchestra in the ’50s and early ’60s. However, his meteoric rise as a world-class musician was abruptly halted in 1964, at age 36, when he lost the use of his fourth and fifth fingers on his right hand. What gives this tale a heroic edge is not just Fleisher’s triumphant return to the performance stage at age 66, but the fact that, during the 30-year interval while he grappled with “two fingers that wanted to make a fist all the time,” he refashioned himself, channeling his gargantuan interpretive gifts into becoming an accomplished conductor, arts administrator and teacher. He also gained renown as a specialist in left-handed repertoire, performing Ravel’s Piano Concerto for the Left Hand so often and well that Musical America named him 1994 Instrumentalist of the Year, two years before his right hand regained most of its former form. Though Fleisher provides an undoubtedly feel-good account, he also cautions readers. “If my story is about anything, it’s about being very careful when your dreams come true,” he writes, and he isn’t afraid to plumb darker moments, nor lightly gloss wayward attempts to overcome the emotional trauma resulting from sudden handicap. Fleisher’s humility and copious anecdotes involving many 20th-century musical lions, such as Schnabel, Klemperer, Szell and Bernstein, combine for a truly winning read.

Inspirational, enlightening and, above all, enjoyable—a revealing window into the private world of consummate music making.