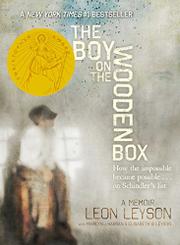 THE BOY ON THE WOODEN BOX

by Leon Leyson with Marilyn J. Harran with Elisabeth B. Leyson

A posthumous Holocaust memoir from the youngest person on Oskar Schindler’s list.

Completed before his death in January 2013, Leyson’s narrative opens with glowing but not falsely idyllic childhood memories of growing up surrounded by friends and relatives in the Polish village of Narewka and then the less intimate but still, to him, marvelous city of Kraków. The Nazi occupation brought waves of persecution and forced removals to first a ghetto and then a labor camp—but since his father, a machinist, worked at the enamelware factory that Schindler opportunistically bought, 14-year-old “Leib” (who was so short he had to stand on the titular box to work), his mother and two of his four older siblings were eventually brought into the fold. Along with harrowing but not lurid accounts of extreme privation and casual brutality, the author recalls encounters with the quietly kind and heroic Schindler on the way to the war’s end, years spent at a displaced-persons facility in Germany and, at last, emigration to the United States. Leyson tacks just a quick sketch of his adult life and career onto the end and closes by explaining how he came to break his long silence about his experiences. Family photos (and a picture of the famous list with the author’s name highlighted) add further personal touches to this vivid, dramatic account.

Significant historical acts and events are here put into unique perspective by a participant.