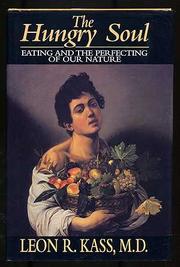 Eating and the Perfecting of Our Nature

Doctor-turned-teacher Kass (Committee on Social Thought/Univ. of Chicago) serves up a stimulating treatise on the anthropology and ethics of eating. In the tradition of ancient philosophers of the good life, Kass suggests how rituals of eating bring the wisdom, friendship, and transcendence that our hungry souls desire. He spices his book with episodes and advice from the Greek and Hebrew classics, topped off with a recounting of Isak Dinesen's Babette's Feast. Gourmands will enjoy browsing for gustatory lore, but Kass has a specific argument to make. With a charmingly eccentric scholasticism, he proposes a model of the human being as the animal that eats, rather than simply feeds. Philosophical meditations on the nature of form, although they take a while to develop fully, lead to a consideration of human omnivorousness and the ethical controls that it requires. Thus, Kass surveys conventions of eating, from taboos against cannibalism to dinner-party rituals. Championing civilized eating, he sees dietary laws, as exemplified by the Book of Leviticus, as reflections of our place in the universe and in relation to nature. Alongside such grand ideas come cantankerous complaints about young people today not covering their mouths when they yawn and about eating on the street—the public licking of ice cream comes in for criticism. Such discriminations of value, however, lie at the heart of Kass's enterprise; even when they appear silly, they enrich his book. One warms to him as one would to an odd, but ultimately good-hearted dinner companion. By the end of the book, one can enjoy the pithy truths even in apparently bland remarks like ``life, as has been observed, is not just a bowl of cherries.'' An agreeable repast, one that will ethically inform even those ill-mannered readers who prefer to help themselves buffet-style rather than wait for the various courses of the argument to be served.