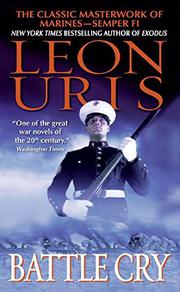 It's terrific: Perhaps there is less searching for the beast in man than in The Naked and the Dead, less uncovering of basic disillusions than in From Here to Eternity, less integration of plot and character than in The Caine Mutiny, but indubitably it shares some of the greatness of each. Here is a saga of the Marines in World War II, told in terms of a battalion known as "Huxley's Whores" in the Sixth Regiment of the Corps, and specifically of the radio squad. It's raw and tough and unvarnished. Much of the language is filthy (The Caine Mutiny proved our contention that dirt was not necessary to vigor, but the adversary still has his side). Many of the assumptions relating to liquor and sex will offend the tender skinned. But the grandeur of man comes through in spite of it,-his capacity for heroism, his fundamental tenderness towards his fellows, his hero worship and recognition of greatness, his ability to measure up to the best in him. The men of the squad come alive and the reader cares profoundly what happens. The story has episodes of raw humor, originality, drama, tragedy- and "American youth in the crucible of war" is tried and found worthy. The Marines from boot camp to Tarawa- in superb narration. Don't miss it.