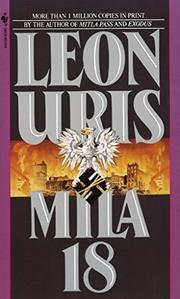 The story of the heroic stand of the Jews in the Warsaw Ghetto against the might of German arms and the depravity of German terrorism has been told unforgettably by John Hersey in The Wall (1950). What is etched forever on memory from that book is the extraordinary depth of psychological perception, as people emerge, larger than life- but with black, white and grey — good and evil- heroism and cowardice — self abnegation and self seeking all giving a note of authenticity that marks it as history rather than story... Uris has chosen, in making central to his story, the same unbelievable proof of man's capacity for suffering and ability to endure and fight and live, to tell it in a broader frame of reference, and to build, on factual details, a tremendous saga of adventure and heroism. Some of his characters, even within the ghetto, fail to meet the challenge; others temporize, excuse their cowardice on grounds of thinking of their families, but Uris never wholly penetrates the conflicts of forces within the people themselves. He simply states the case- develops the facts to prove it. But he has used all of his great gift of story telling to carry the great sweep from August-prior to German invasion of Poland- through the final escape of a mere handful of the freedom fighters from the holocaust that ended the month long defense of the Ghetto. He has tapped primary sources of notes kept at the time and held in the Ghetto Fighters House International Museum; he has interviewed individual survivors of the Ghetto Fighters' Kibbutz in Israel and the Survivors' Association; he has had access to the archives in Jerusalem and elsewhere. And- as he did in Exodus — he has brought history alive in what is indubitably fictionized form, but with the breath of life in the telling.