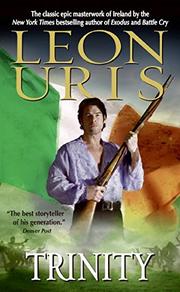 With his usual partisan magnanimity, Uris devotes himself to another popular/unpopular lost cause, the Irish, and in particular the Fenian struggle which extended from the mid 19th century to the Easter Monday Uprising of 1916 in all its "Terrible Beauty." The Trinity of the title, according to the publishers, refers to three families (only two are around for most of the book) but surely must be the past, present and future which keeps repeating itself inexorably through the years. Uris' persistently researched and reconstituted history goes even further back with 18th century insets and the potato famine and Parnell and, and, and. Prominent here, not really by virtue of characterization, is Conor Larkin, a crofty whose "hungering to read" leads to considerable knowledge if never enough to escape his Bogside beginnings; then there are the Hubbles and Weeds, affiliated by wealth, their British backgrounds, and marriage, eventually unto Roger Hubble, political major-domo of western Ulster and his "smashing" wife Caroline who can't help but notice the attractive Conor. But he will fall in love with a Scots-Presbyterian girl, an unthinkable liaison in terms of politics and the Church, just as Jeremy Hubble's love for a girl called Molly Rafferty can never be sanctioned. Out of both fact and fiction, spackled with innumerable "Jaysuses" and "Hail Maws," Uris surely will once again achieve that state of grace where doing good is tantamount to doing well. Be it admitted, he keeps his story sturdily self-perpetuating without interrupting its continuity by so much as having to change the ribbon on his typewriter.