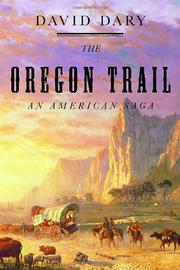 Dary follows the Oregon Trail, pre-history to post-history, with many nooks and crannies in between.

From the early 1840s until the coming of the transcontinental railroad in 1869, the Oregon Trail was one of the great routes west, running for 2,000 miles (at an oxen-powered 3-miles-per-hour) from Missouri to the country that was to become Washington, Oregon, and California. Award-winning western historian Dary (The Santa Fe Trail, 2000, etc.), a brisk, silvery writer, makes careful use of diaries, journals, recollections, reports, and newspaper accounts to conduct readers from the first European peopling of the Oregon area (for this he’s prepared to go back to Marco Polo) to beaver hunters and missionaries, from the Hudson’s Bay Company to the expeditions searching for an overland route. The author explains the economic pressures that encouraged citizens to undertake so arduous a journey, recounting many of the westward movement’s historic events: the Donner Party, the Gold Rush(es), the Mormon exodus, treaties and promises brokered with native populations, treaties and promises broken. But it is Dary’s depiction of the great and awful everyday that will grab the reader: cholera and the buffalo gnat (“a diminutive insect,” wrote one emigrant, “that, before you are conscious of its presence, has bitten your face ears, and neck in ten thousand places”), a French naval deserter running a trading post to hell and gone in the Nebraska panhandle, the unadorned wonder of life on the trail. “I could not but reflect upon the singular concurrence of the events of the day,” mused another traveler. “A death and a funeral, a wedding and a birth had occurred in this wilderness, within a diameter of two miles, and within two hours’ time.”

A thoroughgoing chronicle, told with generous enthusiasm, skill, and an eye for plain truths as well as detail. (86 illustrations, 7 maps)

SEEKING PLEASURE IN THE OLD WEST
by David Dary