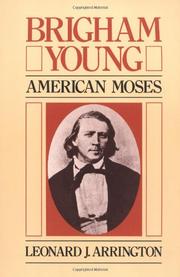 Would you believe an American Joshua? How about an American Caleb ben Jephunneh? The subtitle, unfortunately, isn't the only place where Arrington--Prof. of History at Brigham Young U.--loses his sense of proportion. While admitting that Young was not ""on the level of St. Augustine,"" he doesn't hesitate to compare him to Loyola, Luther, and Wesley as a dynamic organizer-preacher-pastor-theologian. Such problems of perspective aside, this is unquestionably the fullest and most scholarly treatment of Young (1801-77) to date. Arrington describes with panoramic sweep and numbing detail how the mantle of authority passed from Joseph Smith to Young, how Young laid the foundation of LDS church government through his Quorum of the Twelve Apostles, how he masterminded the incredible Mormon migration from the East (and Europe) across the Plains to the Salt Lake Valley, and set up the businesses, colleges, meeting houses, tabernacles, and temples of Deseret. Arrington credits Young with keeping Mormon ethnicity alive--with assuring the continuity of a ""relatively self-sufficient and egalitarian commonwealth of Saints,"" which would survive the (near) disappearance of polygamy and the influx of ""Gentiles"" into Utah. Arrington further sees Young as the moving force behind ""the tenacious tradition of Mormon cooperative institutions"" that guided families from Winter Quarters, Nebraska to Salt Lake City and kept them together in times of drought, blight, and depression. Young was a fiercely energetic pragmatist (Arrington feebly tries to show that he also led a deep spiritual life) and generally free of narrow dogmatism. As a former historian of the Mormon Church, Arrington inevitably views Young from the inside. He will acknowledge Young's failings (highhandedness, occasional meanness, semi-illiteracy), but he takes his 25 or so wives and 57 children more or less for granted. He would have us admire Young's hyperactive mind, which dictated a million instructions on everything from beet sugar factory operations to the ""plump 1Â¬ inch redwood boards"" to be used in making his coffin; but he ignores Young's basic intellectual mediocrity. He cheers the triumph of Mormon material culture, apparently oblivious of its dullness and eccentricity (some names of Young's children: Arta De Christa, Feramorz, Mahonri Moriancumer, Alfales). Definitive in its detailing, parochial in its interpretation.