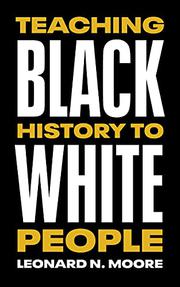 A popular University of Texas professor offers a trenchant survey of Black history—and an argument for why every American, of every ethnicity, needs to learn it.

“African American history should be a graduation requirement in every high school, college, or university in America. Every. Single. One.” So urges Moore, who allows that he took a circuitous path to academia. He was an average student in college but was awakened when he discovered some of the awful facts about being Black in America, past and present. For one, as he observes, not so very long ago, Black drivers were not allowed to pass White motorists in Mississippi, for “it was believed that the dust from the Black person’s car would fly up and hit the windshield of the white person’s car, which would symbolize domination of Black over white.” White students in Austin have flocked to Moore’s survey courses and emerged with a clear understanding of such injustices, and many have gone on to teaching and activism themselves. The author writes cogently of how he handles such ticklish subjects as reparations—he supports them—and, with a look back at Jim Crow laws, current Republican efforts to suppress the Black vote. He is especially good on economic inequalities: Moore observes that if Black and White people were to sit down and play Monopoly together, the Black player wouldn’t be able even to start to accumulate property until the 20th move. He urges that White liberals, many of whom “value trees and the environment more than people,” learn foremost how to be uncomfortable, for the history that he teaches will expose them as being implicated in the same system in which White supremacists operate. Moore closes with a syllabus of suggested reading that “highlight[s] the historical issues and themes that best connect to contemporary Black life in America.”